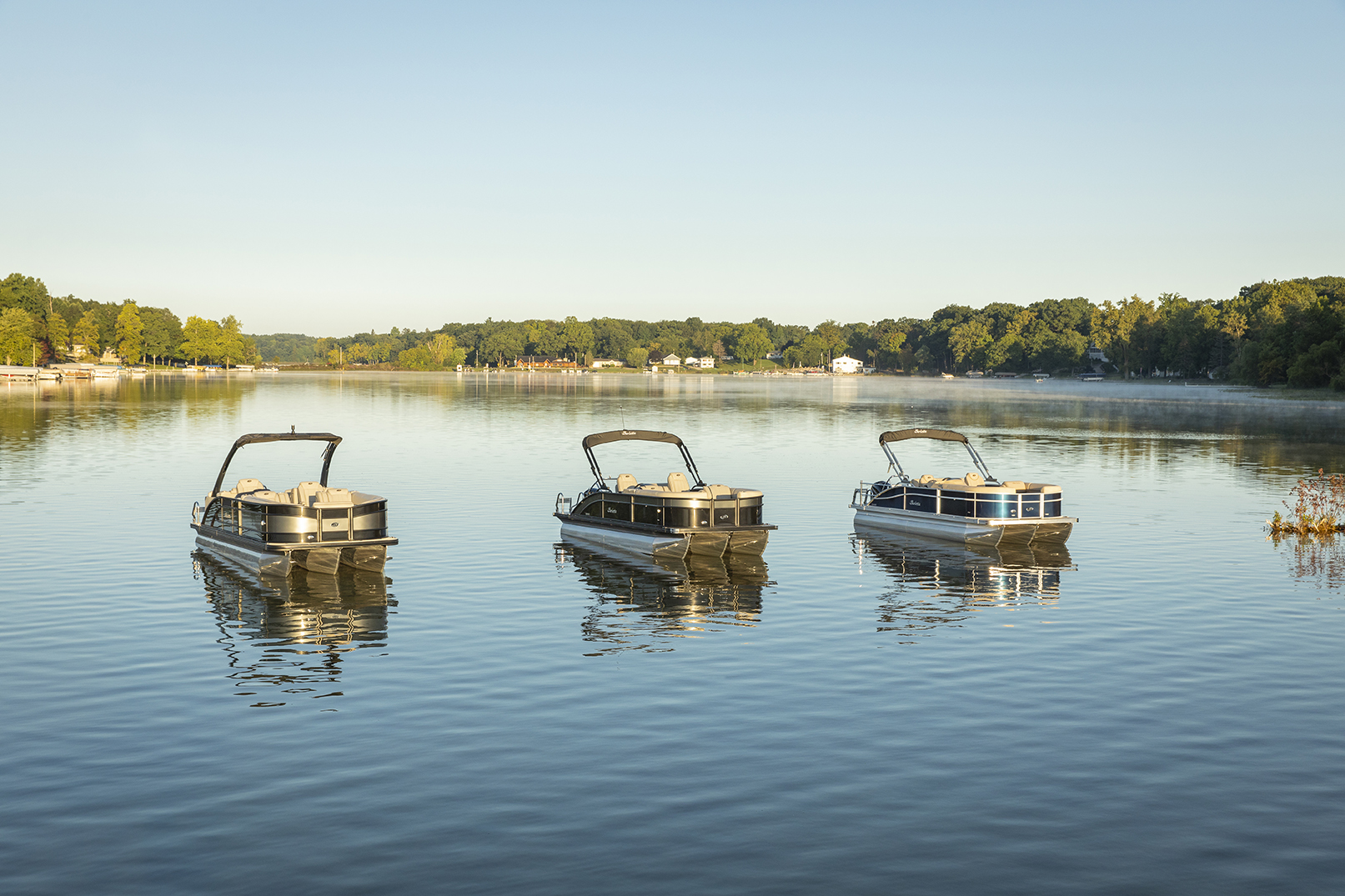 One of the most confusing situations a prospective pontoon buyer faces is going to a boat show and being overwhelmed by the sheer number of available choices. It’s a classic case of information overload and it can make choosing the right pontoon difficult. But by learning how pontoons are built and what’s important can help you narrow the field considerably. And the more you know you’ll discover how a relatively new company like Barletta Pontoons broke into the top 10 in sales in boating’s most competitive sector.

The Stuff You Can’t See Is Important

When most people inspect a pontoon they are considering buying you seldom see anyone look under the deck but if you want to find out about how well it’s built this will tell you a lot about a company’s philosophy. Unlike cars that usually travel on smooth highways, a boat is more like an off-road vehicle that has to be built tough to handle the potentially destructive forces even smaller lakes can dish out when the wind kicks up. Even the simple act of crossing a wake diagonally creates tremendous twisting forces that can only be countered by a solidly built structure.

One of the most important features is the pontoons themselves and a good barometer of the quality of its build can be seen on the rear of the tube. Many of a pontoon boat’s aluminum components are welded together like the end cap on the back of a pontoon. What you want to see is neat, evenly-spaced welds that resemble a roll of coins spread out, slightly overlapping. Sloppy welds are readily noticeable and quickly reveal what sort of quality control a pontoon is being built under. It’s not just aesthetics either; inconsistent welds create weak spots that can fail under the pounding a boat receives. Great welders take a lot of pride in their work and it’s easy to see who is just “cranking it out” or who cares about quality.

Lifting strakes are used to help a pontoon get on plane and ride on top of the water rather than plowing through it. Most are just plain, wedge-shaped additions that often seem more like an afterthought. Barletta took a page out of racing boat design to create a uniquely-shaped, patented dual-stage strake design that works efficiently no matter what planing speed the boat’s going. They are noticeably stouter and unlike most other strakes, they are open in the front and back, which allows several hundred pounds of water to enter when at rest or idle. When the driver accelerates, the water rushes rearward and it is displaced by air, which helps the bow rise more quickly for faster planing. There’s even a fitting to help flush out the strakes to prevent the spread of invasive species from lake-to-lake. Triple-tube Barletta models have lifting strakes on both sides of the center tube and the inside of the outer tubes. This is an optimal arrangement that gives the necessary lift but allows the boat to lean inward during hard turns. To knock spray down, the outside of Barletta’s outer tubes have Wave Tamers that direct spray downward and extra-heavy-duty splash fins up front do the same and help prevent submarining the deck when encountering an oversized cruiser wake head-on.

If you were to remove the deck itself, at a glance you would see what makes a Barletta pontoon’s substructure different from the competition. The crossbeams are massive! Barletta uses a patented hybrid box I-beam that’s about twice as wide on top as most competitors’ crossbeams. This provides a huge amount of contact area for the ¾-inch 7-ply marine-grade plywood deck. And the more area of contact, called layment, the more support it provides while creating more area for the deck to be bonded to it. To join the deck to the hull, first, a chemical bonding agent laid on the I-beam in the grooves designed to hold the material in place. Then the deck is laid down and fastened by coated, rust-free screws that are specially designed to fasten wood to aluminum. While some manufactures claim bolts are the best way to fasten a deck to the crossmembers, a bolt hole must be drilled and the bolt itself only grips from the top and bottom whereas these special screws have incredible holding power throughout their entire length.

What Makes Barletta Pontoons the Quietest?

A problem that can plague pontoon boats is harmonic vibration, usually initiated by an engine running at certain rpm that can cause two joined metal parts to buzz and be amplified by the pontoon’s structure when a certain frequency is reached. When Barletta began production in 2017, one of its goals was to produce the quietest pontoon boats on the planet. To achieve this, their designers created its patent-pending Vibration Isolation Pads Technology (VIP) that places a vibration-absorbing membrane between the extra-stout M-brackets that are support structures attached to the pontoons and its hybrid I-beams that support the deck. This technology was one of the breakthroughs that helped Barletta win the coveted National Marine Manufacturers Association (NMMA) Innovation Awards for its L-Class pontoon boats in 2018.

Coloring Outside the Lines

Other examples of outside-the-box design are amenities such as a pull-out pet food and water dish, Yeti-ready cupholders as well as an in-floor stern cooler/anchor storage compartment on the oversized swim platforms specially designed to accept a Yeti Hopper Flip 18 soft-sided cooler. The EZ Entry stern boarding ladder is an ergonomic marvel with wide, tall grab rails that makes it easy for swimmers of all ages to reboard. An overbuilt ski tow option is tube-ready and that industrial-strength philosophy continues to the extended transom that’s ready to accept today’s high horsepower outboards.

An often-confusing aspect of pontoon boat buying is the endless array of options available. Barletta greatly simplifies the process by making items that enhance the ownership experience standard features. Most companies will sell you a pontoon boat without an aluminum underskin, instead offering it as an option. But a pontoon without this covering leaves crossbeams exposed and when a wave hits them it slows the boat down and makes a loud, unpleasant whooshing sound, not to mention exposing the wood deck directly to the elements. It’s a standard on all Barletta pontoons — even on the budget-friendly C-Class pontoons. If you see a pontoon with carpeting it’s probably because the manufacturer has a storage room full of it. Vinyl flooring holds up better and is easier to clean, which is why all Barletta models feature them.

Some pontoon boat companies have more than a hundred models to choose from, which can add to buyer confusion. Barletta has 12 models in each of its pontoon classes: the ultra-luxurious L-Class, the sporty yet affordable E-Class and new, entry-level C-Class. In addition, there’s the incredible EX23Q, which expands from an 8-foot, 6-inch beam to an industry-leading 14 feet, 10 inches wide.

Looking to find your perfect Barletta?  Build and price one here:  Build my new Barletta